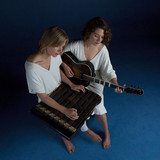 Icelander Guðbjörg Tómasdóttir (also known as Bubba) and Swede My Larsdotter unite their sweetly melodic songwriting and gentle voices in the indie folk duo My Bubba, formerly My Bubby & Mi. Their debut LP, 2010's How It's Done in Italy, introduced an intimate sound that relies on the basic elements of warm vocal harmonies, acoustic guitar, and cittra (a Norwegian lap harp). The members of the Scandinavian duo first met by chance while traveling in Copenhagen. Tómasdóttir and Larsdotter decided to combine their wayfaring ways, and began recording and performing together across Europe and the U.S. Originally working as a trio with Mia Olsen under the name My Bubba & Mi, the group released their debut LP, How It's Done in Italy, in early 2010. Following the releases of a single and EP in 2011, the group slimmed down to the core pair of My and Bubba, whose combined names form the moniker they've used since 2013. Working with producer Noah Georgeson (Joanna Newsom, Devendra Banhart) in Los Angeles, My Bubba recorded their sophomore LP, Goes Abroader, which was released on the Fake Diamonds label in 2014. For their follow-up, 2016's Big Bad Good, they paired with producer Shahzad Ismaily (Colin Stetson, Sam Amidon) in Brooklyn. A year later, they released the original song "Gone" backed by a cover of Bob Dylan's "You're Gonna Make Me Lonesome When You Go" for a Third Man Records 7" vinyl series. ~ Timothy Monger & Marcy Donelson, Rovi