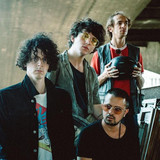 Exploding on to the indie scene in the mid noughties from beginnings on London’s Eel Pie Island, Mystery Jets have always ploughed their own musical furrow. They're unique for the unusual network of relationships at their centre: Blaine and Will have known each other since nursery school; drummer Kapil Trivedi joined them in 2003 as a teenager and – famously - Blaine’s father Henry Harrison, once a touring member, remains an invaluable part of their creative process. Bass player Jack Flanagan joined the band five years ago and instantly meshed with their sensibilities. Following the success of their 2016 album 'Curve of the Earth’, lead singer Blaine Harrison was living as a property guardian right round the corner from Trafalgar Square and found himself witness to an entire year of protests. Every weekend from January 2017 on, people were marching for a different cause. Over the course of that year Mystery Jets’ sixth long-player, A Billion Heartbeats, was born. While 2016’s ‘Curve Of The Earth’ was an inward journey, ‘A Billion Heartbeats’ points the lens outwards: “This album wasn’t about making pointed opinions,” says Blaine. “It was about being a mirror for what’s going on, reflecting back the way people are feeling.” A Billion Heartbeats was released to critical acclaim during lockdown in April 2020.