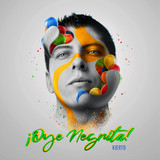 Kierto (Pablo Andres Cabezas born October 10, 1987) is an urban music singer, rapper and songwriter originally from Ecuador. At age 20, he moved to the United States to Los Angeles, at age 22 he moved to work as a Video Director for a New York Agency, where he also launched his first Hip Hop Album “The Cave” and participated in Latin Music Festivals in New York. Throughout his career, at age 28, he got a Master’s Degree at Berklee College of Music in Contemporary Performance and Production in Spain, he performed at the Finals ATP Worldtour Valencia 2016 and various important music events in Madrid, Valencia and Miami. His show features a live band which makes his performances unique and different. His music was defined as Hip Hop, Rap and Reggae. He then evolved artistically and musically into Reggaeton. Throughout his career, Kierto has won Video and Independent Music Awards, he’s the creative director behind each song and always fuses sounds from different urban genres to produce hit songs with his deep vocals style and unique tone. His upcoming second Album features Reggaeton and promises will make you dance over and over.