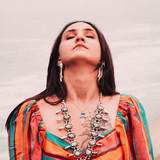 Ellanora DellErba writes at the cross-section of vintage country, folk, and ballad pop, recalling the dirt roads traversed by Emmylou Harris and Linda Ronstadt. Ellanora's debut LP, Lost To A Coastline, is a soulfully folk-flavored Americana album, brimming with stories of lost love, lessons learned, taking the higher road, and remaining hopeful despite intense life struggles. The evocative title references a love lost to a geographic running away. On a metaphorical level, the title connotes the dangers of global warming and other environmental disasters—lands lost to a coastline. The songs on the album are instantly familiar—good friends during dark times. They’re edgy, earthy, and elegant; gracefully adorned with lonesome pedal steel, haunting ambiance, and stately fiddle flourishes. At the center of it all is Ellanora’s tasteful guitar accompaniment and her sensually expressive vocals, spanning soft honeyed tones and richly expressive, full-voiced soul.

As a prolific poetess, she has dozens of new songs, ready to record. Although Ellanora DellErba is new “on the scene” she is a seasoned professional with the catalog, the chops, and the insight to harness the momentum from this debut album and embrace the future with many more albums to come.