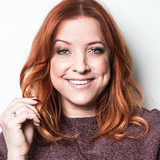 Shirley Clamp is one of Sweden’s most loved artists who got her breakthrough in 2004 when she participated in Melodifestivalen with the song “Min kärlek”, which became a major hit in Sweden. The single was included in Shirley’s debut album “Den långsamma blomman” which was released the same year and reached #3 on the Swedish album chart. Since then she has released another four studio albums, a compilation, several singles and an EP. Through the years Shirley has participated in various TV shows, a few more times in Melodifestivalen as well as done numerous and very appreciated live concerts around Sweden. In 2019 she

set up her very own stage show ”Shirley Clamp - nästan 20 år på scen om man avrundar uppåt” together with her band. It got raving reviews and shows that Shirley, besides her musical talent and amazing voice, also has a wonderful comical timing In the Spring 2021 Shirley will, apart from releasing new music, also be one of the hosts in Melodifestivalen and be part of Stockholms Stadsteater’s production of the musical “Sound Of Music.