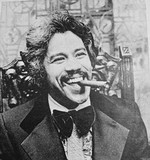 Johnny Pacheco is widely recognized as a salsa pioneer and innovator, is

a 9-time Grammy nominee and was awarded the Latin Grammy Lifetime Achievement Award by The Latin Grammy's in 2005. Playing the flute, saxophone, and various percussion instruments, Pacheco performed with Charlie Palmieri's Latin orchestra for a number of years before forming his own band in 1959. In 1960, he organized his first orchestra, Pacheco y Su Charanga. The band signed with Alegre Records and within the first year of its release, his first album Johnny Pacheco y Su Charanga sold over 100,000 copies. Beginning then and through the end of 1963 Pacheco introduced a new dance craze called "Pachanga". He became an internationally renowned star and toured extensively throughout the United States, Europe, Asia, and Latin America. Moreover, "Pacheco y Su Charanga" was so popular his Latin band headlined the legendary Apollo Theater in NYC in 1962 and 1963. In 1964 he joined Jerry Masucci to create the legendary Fania Records label considered the "Motown" of Latin Music where they released recordings by legends Celia Cruz, Willie Colon, Ray Barretto, Hector La Voe, Bobby Valentin, Cheo Feliciano, and many others. He's composed over 150 songs. Among them