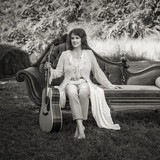 b. c.1972, Laurel, Mississippi, USA. Lovett?s teenage mother was unable to care for her and as a baby she was put up for adoption. With her new family she sang in church and attracted so much local attention that at the age of eight she recorded ‘Me And Jesus’ and ‘One Day At A Time’. She began writing songs at the age of 10 and three years later formed her own band with which she played regularly at the store owned by her adoptive parents. In particular, her mother encouraged her to develop her musical skills, but also persuaded her to keep a foot on the ground and so she also studied to become a radiographer. Meanwhile, her name and reputation spread and she appeared at bluegrass and gospel gatherings. At one such assembly, the Jimmie Rodgers Memorial Festival in Meridian, Mississippi, she was heard by Jimmy Metts, a man with Nashville connections. He persuaded her to take a few days leave from her job to go there to write songs. Before long, she was not only writing songs in Nashville, she was also performing locally and occasionally had the chance to open shows for leading artists of the day. In 1997, Lovett recorded her first album, from which came ‘Look What Love Can Do’, her own composition in which she paid tribute to her natural mother and her adoptive parents. Eagerly greeted by audiences yearning for the traditional country sound, Lovett quickly found and has not only kept an enthusiastic audience but has built upon it owing to tours including a 2000 trip to Europe.