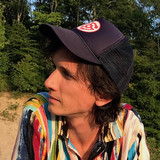 James Wyatt Crosby is a musician and recording artist currently living in the rural township of Tiny, Ontario, Canada. His 2017 debut album Twins featured the sleeper hit Deep In Yr Mind with over 1.3 million streams on Spotify. The album struck a definite chord with critics, earning a coveted spot in Nerdist's "25 Best Underground Albums Of 2017". His 2018 follow-up single Lemonade (No I Never) was a surprise hit on Canadian college radio, peaking at #1 on CFMU-FM. His 2019 follow-up EP Here We Are in Heaven was a fan favourite, featuring even more addictive dreampop melodies, carefully curated sonic backdrops and a variety of enticing rhythmic textures. 2021 saw the rediscovery of James' catalog via a handful of television placements (CBC-TV, Netflix). James is now set to emerge from a pandemic-induced recording and touring hiatus with the upcoming release of his next single Shadow of a Ghost on Canadian modern dream pop/chillwave/indie surf imprint Wavy Sun. For more info visit: https://jameswyattcrosby.com/