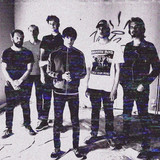 Les Gordons was formed in Örebro, Sweden, in 2012, and since the beginning, the energy-driven band has accomplished a lot. They released their debut album and did a US tour in 2015, released the EP "Need To Feel" and won the music competition "Svensktoppen Nästa" in 2016 and participated in the biggest television show in Sweden (Melodifestivalen) in 2017. One year later, they released their second and more rich-sounding, electronica-influenced second album ”Going Down The Killer Slope", including the singles ”Bound To Fall” and ”Let The Music Speak”.