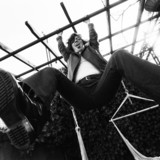 OMG I MADE IT, the latest project from PRONOUN -- the nom de plume of emo-pop auteur Alyse Vellturo -- hits like a much-needed catch-up with an old friend you hadn’t seen since all of this happened, five sparkling songs encapsulating the life of the Brooklyn-based indie label manager by day, bedroom artist by night who’s toured with your favorite formative emo bands. OMG I MADE IT is out now via Wax Bodega. Before the pandemic hit, Vellturo would typically hit three or four shows a week and some of the EP’s finest details were born out of these late night adventures. Those aforementioned “whoo!”s on “i wanna die but i can’t” -- which truly take the track to the stratosphere -- were the byproduct of Vellturo drunkenly returning home to her bedroom studio and trying to capture the night’s catharsis in a few takes. Same for the EP’s dramatic opening, in which Vellturo yells, “Sound the alaaaaaarms!” thus inspiring an actual siren sample dropped into the song. “I never would have thought to do that, but when I got home from a show, I was just like, I’m gonna do this and it’s gonna be hilarious.” They’re little things, but the sort of snapshots that make PRONOUN's music so effecting.