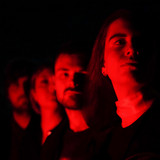 Since the release of their debut single in 2018, Another Sky have flawlessly merged hard-hitting, difficult topics with unparalleled cinematic sounds through a series of singles and EPs, stunning festival audiences across the world, fans at their headline shows across the UK including last year’s London’s Village Underground, and those watching their appearance on Later With Jools Holland alike. Another Sky’s debut album proves to the world just how vital the words of lyricist and vocalist Catrin Vincent truly are. Her poetic rage has been titular in Another Sky’s story, grappling with the topics of toxic relationships, childhood trauma, systematic elitism, Brexit Britain, the rise of Donald Trump and much more. Juxtaposed against the horizon reaching sound of guitarist Jack Gilbert, bassist Naomi Le Dune and drummer Max Doohan, Another Sky sound like nothing and nobody else. Yet the exciting part? This really is just the beginning.