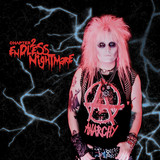 Midnight Danger is a Synthwave project from Stockholm (Sweden), created by producer and guitarist Chris Young in late 2015. Inspired by the new wave of synth music, Midnight Danger is a nostalgic soundtrack experience full of synthesisers and guitar riffs, delivering lots of power, punch and retro vibes. When performing live, Midnight Danger also provides a synchronised light show with spectacular fixtures and props, making the audience go through some sort of theatrical horror movie experience. The debut album “Malignant Force” was released in January 2018 via NRW Records having an astounding reception. The promotion of the album was followed by numerous live performances over Europe and South America. Over the last two years, Midnight Danger gained not only raving reviews and feedback for his performances but also the trust of co-touring artists, fans and promoters alike, paving the road for greater achievements. Having also released numerous singles since 2015 and participated of collaborations and compilations such as “Magnatron” and “In Search of Darkness”, Midnight Danger is ready to release the new album titled “Chapter 2: Endless Nightmare” on August 21st 2020 via NRW Records. The title track gained a music video that counts with Scary Dee on drums - undead character that will join Midnight Danger on all live performances promoting the new album.