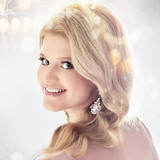 MIRUSIA came to worldwide recognition over 12 years ago as the star soprano of André Rieu's global concert tours. Today MIRUSIA is a rising solo artist in her own right with sold out tours across Europe and Australia. Her unique and personal bond that she shares with her fans from all over the world has earned her a place in their hearts. FACTS: • Full name: Mirusia Louwerse • Birthday: 29th of March • Australian-Dutch nationality • Speaks English and Dutch fluently, and a little German • Released seven solo albums and three DVDs • Studied at the Queensland Conservatorium of Music under Gregory Massingham • Only classical artist with a ARIA No. 1 Chart Award for charting at Number One on the ARIA Classical and Pop Charts • International Ambassador of the 'Australian Children's Music Foundation' and the Redland Foundation • Youngest winner of the Joan Sutherland Opera Award • Title latest album: Christmas Memories (2019) • Named “The Unconventional Pop Star” by Australian media • Named “The Angel of Australia” by André Rieu