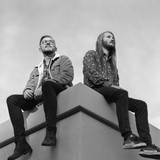 RED TAPE REDEMPTION delivers dusty bluesrock straight out of their souls. The project started as a One-Man-Band by Lukas Oberholzer in 2019 since his former band Coffee For The Restless broke up. After a few solo shows, his former CFTR band colleague Tobias Kalt picked up the drumsticks to join forces – Red Tape Redemption started rock ‘n’ rolling. In september 2021 they release a mini-ep called DRIVING LIVE which consist of a live performance of three songs of their debut EP DRIVING SOUTH which was released in december 2020 through the independent label THE YELLING LIGHT.