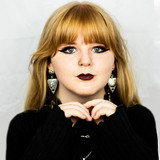 Alice Lynn is a 18 year old singer songwriter from Nottingham and has been played gigs and festivals around Nottingham and Derbyshire since she was 12 years old. She composes and performs her own music and has played at lots of festivals such as Off The Tracks Festival, Sneinton Festival, Dodgestock and Deerstock several years running.   I have also played lots of venues around Nottingham such as The Maze, Saltbox, Rough Trade, Head of Steam and the Sumac Centre.   Also, in 2018 I appeared on Notts TV to play a few original songs. During that year I also got the chance to work with promotors such as Acoustickle, Punk for the Homeless, I'm Not From London and Roots Live Music.