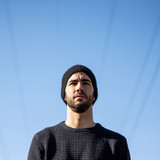 World renowned and Grammy nominated Austrian composer Manu Delago uses his signature percussive skills, rotating band of multi-instrumentalists as well as electronic manipulation to create dynamic, high-concept explorations which harnesses the best of his adventurous spirit and unique vision. He has regularly collaborated with various artists such as Björk, Anoushka Shankar and Olafur Arnalds, has appeared as a soloist with the London Symphony Orchestra and more. He’s performed in prestigious venues in more than 50 countries around the world. His ambitious and profound new album, ‘Environ Me’, out via One Little Independent on September 24th, uses sounds recorded directly from an array of natural sources.“A masterful and sensitive musician” – The Telegraph “Virtuoso” – The Times “The album could very much sit wonderfully amongst the contemporary classical giants of the present, but there is no escaping its distinctiveness” The 405 “Dreamy acoustics” XLR8R