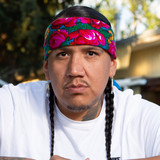 Drezus has been a staple in the Indigenous music scene for over a decade. Born in Saskatoon, Saskatchewan, Canada and from the Muskowekwan and Cote First Nations respectively, Drezus has opened up a new world that combines traditional Anishinaabe and Nehiyaw teachings with hip-hop music and expression. He credits his growth and perseverance through life's challenges to the creative arts. He won five Indigenous Music Awards from 2013-2015, was nominated for a Juno in 2009 and most recently won a MTV Video Music award for “Best Fight Against the System” in 2017 with Taboo of The Black Eyed Peas. He appears on the acclaimed Paramount Network TV series, “Yellowstone” alongside Kevin Costner in Season 2. He is currently working on his third studio album entitled Public Enemy.