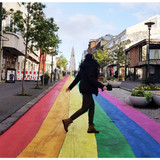 Cynthia grew up in the NYC music scene and moved to Los Angeles on the heels of the Northridge earthquake. Immersing herself in the indie music scene, she formed Saucy Monky with Dublin-born Annmarie Cullen.The girls went on to perform for festival audiences across Europe and chart on Irish radio. They penned songs for TV and film, with placements on iCarly, Zoey 101, Drake n' Josh, Blue Bloods, and more.They landed a Wendy's commercial out of the box and a theme song on ABC daytime. Cynthia continues to produce, compose and collaborate. In 2016 she joined The Secret Things - with one EP and various singles to their credit, the power trio performed live on Toronto's “House of Strombo” - a prestigious Canadian radio show. Their single 'Keeper' was picked up by Loud Kult Records, Sweden/The Orchard. After both projects went on hiatus, Cynthia returned to Ireland in 2019 for her second chapter of solo music-making. She debuted her set (which includes real-time sampling) in Hollywood and toured across Ireland, performing her single 'Phones' live on RTEs popular ‘Arena’ radio show. Her singles and cinematic videos have premiered on the Hot Press Magazine music channel. Her latest single is an extended remix of ‘Forever For Goodbye (Near Death Remix)’ with oodles of gorgeous sounds and textures. The video takes you on an other-worldly journey through emotions and space. Single drops May 18th. Follow Cynthia. https://linktr.ee/dolceveta