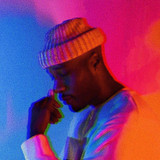 Gene Noble is an accomplished, singer-songwriter who has written for some of music’s top artists, including Chris Brown, Jason Derulo and Faith Evans. His 2016 independently-released single, “Only Love” feat. Pitbull and Shaggy reached Top 40 status and was played on radio stations all over the world. Noble has toured with Sting, Shaggy, Usher, Chris Brown, Jay Z, Alicia Keys, Lauryn Hill, and Jill Scott to name a few. Gene’s debut single, Too Many Lost (Stand Together Mix), was released on April 17, 2020 and his EP will follow later this year. Noble’s life began in Manhattan, Kansas as an Army brat. Unfortunately, when Gene was very young, his father was killed while serving in the military. After his father’s death, music became Gene’s sanctuary. Noble’s music is influenced by his love of jazz, gospel, rock, pop, and country. After witnessing R&B artist D’Angelo perform on his Voodoo tour, he knew he wanted to become a celebrated performing artist. A native of New York, Noble currently resides in Los Angeles.