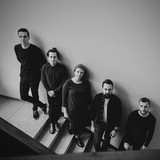 Awarded ‘Best newcomer’ during the Estonian Pop Music Awards (2018), Estbel found it’s way to the bigger stages with highlights such as Tallinn Music Week & Viljandi folk music festival in Estonia, Dranouter Festival in Belgium, Celtic Connections in Scotland and Underneath the stars in England. With the beautiful and magical environment of Estonia as their home and inspiration, the band finds itself wandering between genres like indie, folk, pop, and rock. The warm and fragile voice of Leana Vapper-Dhoore, accompanied by the more traditional sound of folding harmonium and accordion, played by Hartwin Dhoore is backed up with electric guitar from Kristjan Kaasik, backing vocals and bass guitar by Carlos Liiv and drums and percussion from Sébastien Grenat.