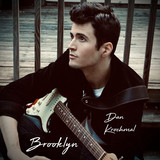 Australian-born singer-songwriter Dan Krochmal has been stunning audiences into silence since his arrival to the US. With an ethereal voice that soars across octaves, and poignant, vivid lyrics coming straight from the soul, Krochmal’s performances defy gravity. In late 2014, Krochmal was one of ten acts chosen to perform at the 17th Annual Jeff Buckley Tribute in Chicago, before he embarked on a solo acoustic tour through the US. After performing in New York, he realized he needed to move there, returning in May 2015 with only a suitcase and his guitar. In 2016 he was a featured interviewee in Sony Music’s “You & I” documentary about Jeff Buckley’s early career. He lived in the East Village and performed at many world-renowned venues including Rockwood Music Hall, Mercury Lounge, Pianos, and the Bitter End, and opened for larger acts like Reeve Carney and Fatai. In 2018, Dan released a single called ‘Pride Before The Fall’ in response to the Parkland massacre, and performed at the March For Our Lives Long Island rally. A live video of the song garnered over 31,000 views in several days. Dan is about to release his next studio album. He recorded the rhythm beds at Grand Street Recording in Brooklyn with Lenny “The Ox” Reece on drums (Demi Lovato, Kimbra, Super Duper Kyle, DJ Premier), and David Cutler on bass (Iggy Azalea, SZA, JT Taylor). He recorded and mixed the rest in his own studio space in the woods. It is slated for release in October 2020.