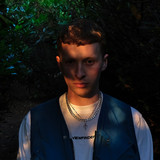 Born far away from key electronic music hubs like LA, Glasgow, and London, 24-year-old Sam Gellaitry grew up in Stirling – an old town in central Scotland that’s rich in medieval history and visually stunning views. Living here Sam was exposed to happy hardcore through his older brother – a kind of hard dance music born from the UK and Europe’s breakbeat and rave scenes – this in turn lead to an interest and start in the world production. Sam views the world uniquely through palettes of vivid colour; a C-minor scale becomes purple, C-sharp minor is cool and blue, and nighttime is best evoked in dark F-minor reds. His music is a journey through experience, circumstance, and surroundings, told through his impressive, synesthesia-informed knowledge of different musical tones. His first breakthrough song – 2014 single “Powder” – saw the young artist bridge the gap between hip-hop and electronica, treading delicately as it glitched between maxi-and-minimalism. ‘Escapism’ was Sam’s first extended project released in 2015, with ‘Escapism II’ (2016) and ‘Escapism III’ (2017) following thereafter. The series showcased a young producer picking and choosing his way through a lavish buffet of sound and picked up nods from many of his peers in the electronic scene, like Kaytranada and Flume. Ultimately, this next phase of Sam’s career comes back to why he does it all in the first place, creating colorful music: a source of respite, release, and happiness.