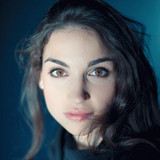 With a clear focus on the works of Frédéric Chopin and Russian music, pianist Olga Scheps has found a niche in Romantic repertoire that has secured her popularity. Born in Moscow in 1986 to a musical family -- her father is Ilja Scheps, a pianist and professor in Aachen at the Hochschule für Musik und Tanz, Köln -- Scheps began taking piano lessons at age 4, and by 12 had begun her concert career. At 14, she performed the Prokofiev Piano Concerto No. 1 in Düsseldorf, and gave a series of recitals for the Best of NRW concert series. Scheps has performed across Europe and in Asia, and she made her debut in the United States playing Liszt's Piano Concerto No.2 with the San Antonio Symphony Orchestra, Sebastian Lang-Lessing conducting. A guest artist at many music festivals, Scheps has appeared at the Klavier-Festival Ruhr since 2007, and performed at the Festspiele Mecklenburg-Vorpommern, the Heidelberger Frühling, the Kissinger Sommer, the Schleswig-Holstein Musik Festival, the Mozartfest Würzburg, the Mosel Musikfestival, the Rheingau Musik Festival, and the Sommerliche Musiktage Hitzacker. Scheps is also an avid chamber musician, performing with Daniel Hope, Erik Schumann, Adrian Brendel, Alban Gerhardt, Jan Vogler, and Nils Mönkemeyer. Scheps signed with RCA Red Seal and released her first album, Chopin,in 2010, which she followed with the Russian Album later that year. She released The Chopin Piano Concertos in 2014, and she has recorded the music of Schubert, Satie, and Tchaikovsky.