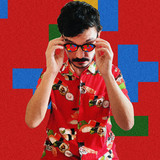 Mariano Marovatto is a singer-songwriter, author and performer from Rio de Janeiro. Following his debut album Aquele Amor Nem Me Fale in 2010, which mainly comprised an indie bossa nova style, Mariano made his breakthrough as an avant-garde pop artist with the release of Praia in 2013 and Selvagem in 2016. ​Since 2006, Marovatto has published books of poetry, music and literary criticism. From 2009 to 2016, Mariano starred and wrote a TV show about music on TV Brasil called Segue o Som. Selvagem is his latest release in Brazil and Europe. The album consists exclusively from long-forgotten folk song of Brazil and Portugal, that were chosen by the author after a painstaking research. In Selvagem Mariano is aided by Pedro Sá,