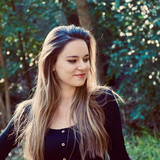 Swiss French HMMA-Winning composer Sandrine Rudaz creates emotionally compelling music for film, video games, and theatre. Based in California, Sandrine has a proven track record of success bringing stories from talented directors to life, most notably the French play Blanc, which was performed over 25 times in France and Switzerland. Other notable experience includes writing and conducting orchestra music for animated film Star Bard, for which she won Best Orchestration at the 17th Garden State Film Festival, feature films such as The Shell and Aylesbury Estate, and short films such as the award-winning Kneeling Sheep. Sandrine’s work for full orchestra Aurore Boréale has been recognized with a Jerry Goldsmith Award nomination, a global Music Award, and a Hollywood Music in Media Award. The Hollywood Music in Media Academy honors original music for visual media from around the globe, with past winners including Alan Silvestri (Avengers: Endgame), Ludwig Göransson (Black Panther), Lady Gaga (A Star Is Born), and Alexandre Desplat (The Shape of Water). In 2018, she was selected to attend the SESAC Workshop with composer John Swihart (How I Met Your Mother). Sandrine is both exceptionally versatile—able to wield both full orchestra and a sparse piano and cello duo to devastating effect—and stylistically distinct, due to both her European classical piano training started at age 4 and American influences.