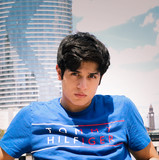 Take a Stand! East coast's favorite B-Boy is here to usher in the new Era! Alex Madigan, a rising artist from Queens, NY, is on a path to change the landscape of the industry for the artists of tomorrow. Representing the freaks, geeks & outcasts, Alex wants to bring the culture of street dance and attitude back to the forefront of pop music. Not looked at as the typical pop star the world has grown accustomed to, Alex wants to put the “Bad” back in Reputation.   Being trained under the tutelage of legendary vocal coach & original “Sugar-hill Gang” Member “Craig Derry,” Alex performed on Broadway for the rock concert Rocktopia in 2018. Now in late 2020, Alex dropped his second single “I’m Everything,” a dance/pop track that speaks on issues the world continues to face & how together we must unite in order to initiate change. For 2021, Alex plans on releasing further singles.   Known by his nickname “The B-Boy of Pop,” Alex grew up constantly listening to his idols Michael Jackson, James Brown, Jason Derulo & Bruno Mars. Wanting to dance, his uncle taught him his very first dance move known as the “six-step,” making him fall in love with Break Dancing and the hip-hop culture. In 2015, he met Craig Derry and from then on the rest was history. Alex's main goal is to change the landscape of music and help the next generation of artists. Hear are voice! Loud & proud! We can shout!   Follow on Youtube & Instagram (@alexmadigan3) & join the New Era!