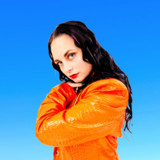 ELBA is the sound of powerful Scandinavian pop at its finest. Her energetic and catchy synthpop is empowering and powerful pop music - it can both break your heart and set fire to the dance floor. Behind ELBA you find Danish Ellen Bathum. She’s not only a gifted singer but also a musical craftswoman. Ellen is deeply involved in every aspect of her music, which allows her individuality to shine through. With a series of uncompromisingly well-written singles, ELBA is well on her way to becoming one of Denmark’s next big female pop artists. ELBA is already making waves inside the Danish music scene. She’s played prominent festivals such as Roskilde Festival & SPOT Festival and played at the main stage of important cultural events such as Copenhagen Pride. Most recently, she received 5 stars from GAFFA (Danish music magazine) for her performance at Parasol Festival. Her latest EP ‘Speak’, made with producer Søren Buhl Lassen (Blaue Blume) and Asger Nordtorp Pedersen (Guldimund), received 5 stars from GAFFA and considerable attention in both Denmark, Sweden and Germany. The songs ‘Sirens’ and ‘700 Angels’ made radio rotation on Danish Radio’s ‘P3’ and received airplay on the sister channel ‘P4’ and German ‘Bayern 3’. 'Speak' was furthermore added to playlists such as 'New Music Friday Denmark' and 'New Music Friday Sweden'. In October 2021, ELBA plays her first headliner tour consisting of 9 concerts throughout Denmark.