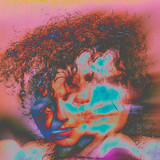 Born and raised in north-west London, Georgia is a multi-instrumentalist, producer and songwriter. Her eponymous debut album was released in August 2015; written, performed, produced and recorded by Georgia in its entirety at her home-studio; it presented a very necessary new talent, one with real spirit and one that is unabashedly herself. Georgia’s music is fascinating and sharply paced, packed with injections of lightness and fun, pared with rich, bubbling melodies that makes listening to it an experience that takes you into the party, through electro-pop into R&B, and back again. Her deep, brooding reflections carry us through euphoria, heartache and melancholy but always with the memory of the good times. In 2020 Georgia released Seeking Thrills to global critical acclaim, establishing herself as one of the most singular and irresistible UK pop talents. Shortly prior to its release, Georgia was included in the longlist for the BBC Music Sound of 2020. Whilst later in 2020, Seeking Thrills was shortlisted in the Hyundai Mercury Music Prize 2020. The euphoric, Started Out is infused with hedonism and influences from the Chicago house scene of the 80s. It’s a shining example of Georgia’s flair in the studio; melting her thrilling pop lyricism, with her rich wealth of production experience. Whilst “About Work The Dancefloor comes as a defiant slice of electro-pop, exploring love, passion, melancholy and the thrill of finding yourself on the dancefloor.