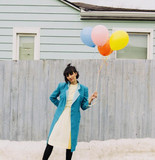 LISA’s offbeat style is genuinely disarming and naturally draws you in. Born and raised in Montreal, this eclectic artist manages to create music that is both nostalgic and avant-garde. Playful melodies washed in dreamy synths, recall bands such as The Zombies and Angel Olsen.   From a young age LISA has been enamoured of people’s unique connection between personal style and self-expression. With a background in theatre and fashion, she takes great pleasure in exploring her voice and vision through all types of mediums.   Over the past year, LISA has been working with UK producer David Granshaw. Recording in stages at Chale Abbey studios on the Isle of Wight and then collaborating from afar to complete the tracks.   Preceding her debut release LISA has already had her music featured in numerous projects. Some of these credits include short films and web series which have premiered and screened all over the world including the Austin and Cannes Film Festivals.