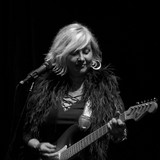 Diane Durrett speaks for anyone who’s ever heard her perform. Diane serves on the Atlanta Board of the Recording Academy, best known for the Grammy's. As part of her service in 2017, she met with senators for the Grammys On the Hill event in D.C. Diane is a Global Peace Award finalist and winner of the 2015 ‘Peoples Choice Award’ by the Atlanta Blues Society, as well as awarded the ‘Best Self-Produced Album’ representing Atlanta in the International Blues Challenge. “Soul Suga’ & Diane Durrett” received national & international attention charting in the Top 10 of the Roots Music Report Contemporary Blues chart. Durrett’s album was entered into the 58th Grammy Awards as Best Americana Album and Producer of the Year.