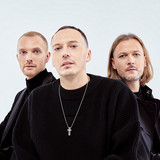 Russian most famous and maximum awarded DJ-trio worldwide known as SWANKY TUNES pioneered progressive and electro-house sound proudly represents Russia and East Europe on the map of dance culture celebrating 20th anniversary in 2018 and shows no chances to stop grow as DJ act every year. Hailing from Smolensk Swanky Tunes made the entry in Top 100 DJ MAG in 2016 and proceeded with position #27 (Highest Climber) next year becoming by 2019 the Russian act, staying in DJ MAG TOP 100 five years in a row. From their early releases with Tiesto, Kaskade and R3hab to international hits like «Day By Day» with LP and ultimate European radio and club banger «Fix Me», through huge success of house single «Far From Home» (over 14 million streams on Spotify, named Grand Slam on Slam FM) and Beatport chart-topper «Entertain Us» feat. Far East Movement, Swanky Tunes are showing no signs of slowing down and keep releasing dance floor anthems like «In The Club» released on Hexagon of Don Diablo. Swanky Tunes significant release as remix of «LP - Lost On You» became 10th most played radio hit in East Europe and Russia in 2016 and during four weeks it became most Shazamed track of the year. In 2018 they teamed up with LP to repeat that success and produce a new collaboration single «Day By Day». As a highlight, Swanky Tunes’ single «Here We Go» was featured in the movie as official soundtrack for Fast & The Furious 6. Get Swanky with Swanky Tunes, join the movement!