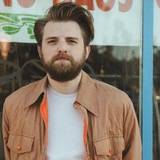 “Pigeon Club” is the self-titled debut album from Wayne Whittaker, a musician and songwriter in Los Angeles. What began as a de facto solo album morphed into a creative collaboration between Whittaker and Grammy winning co-producer/multi-instrumentalist John Would (Fiona Apple, Warren Zevon). A record steeped in warm and subtle textures, “Pigeon Club” matches well-crafted songwriting with restrained and deliberate arrangements. Amy Wood (Fiona Apple, The Donnys The Amys) provides much of the album’s steady backbeat, while the legendary Pete Thomas (Elvis Costello, Elliot Smith) sits in on the sneering rocker “Not So Sure.” Honest and conversational lyrics cut through the album’s indie-folk soundscapes, inviting an intimate dialogue of self-reflection, doubt, and begrudging optimism. Just look to the album’s lead single “Worry About It”: “Okay so things feel kind of strange, and you think you feel an earthquake every day / it’s alright to cling to your doorframe, but if I were you, I wouldn’t worry about it.” Thematically the album moves between emotional transparency and self-effacing gallows humor. With the release of “Pigeon Club,” Whittaker hopes his audience will feel as though they’re among friends. Whittaker says, “I’ve spent quite some time in my own head this year, which is where I think a lot of folks tend to reside. I hope the anxieties presented in these songs feel familiar, so at the very least we can compare notes.”