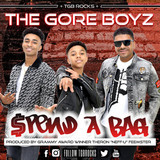 We, The Gore Boyz, are releasing our 4th GRAMMY PRODUCED song and video called "SPEND A BAG ". We are a True boyband, National Honor Students(All A's) and our music is CLEAN. The main digital platform our music is on is SPOTIFY and the others included are Apple Music, Amazon, Google Music, and Tidal. This song is another “ WORLD PREMIER” again, after we released our last THREE hits “Kisses for the Road” and "Remedy" and “Swing My Way which gained over a Million views on YouTube and over 2 million streams world wide. "Spend A Bag" will be a bigger hit . It is a clean, catchy, and urban song that you won't be able to get out of your head. It will definitely be the song played in the clubs. “Spend A Bag ” produced by GRAMMY AWARD(The Eminem Show)-WINNING PRODUCER and L.A.-based artist Theron “Neff-U” Feemster. Theron Neff-U Feemster, a Grammy Award winning producer who has worked with everyone in the music industry "The King of Pop" Michael Jackson, Dr. Dre, Eminem, Justin Bieber, Neo, and Will Smith(MIB). He has assembled a team that included singer/songwriter Gabrielle “Goldie” Nowee who has written hit songs for major stars like Chris Brown and Justin Bieber. She holds an online video conference with the Boyz prior to writing their songs. The other team member is Mischke Butler who is the vocal engineer and producer has worked with major stars like Michael Jackson and Britney Spears. Follow us @tgbrocks