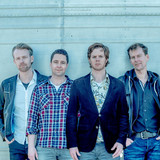 The Woods arose from the power trio JeeBee which performed on Dutch blues festivals for more than 20 years. The Woods are Joris Bos on guitar / vocals, Martijn Drijfhout on bass guitar, Johan Zielstra on keys and Pieter Dokter on drums. Joris mainly plays Tele’s and Les Paul and calls Jonny Lang and Freddie King his biggest influences. It was Paul Gilbert that praised Joris for his ‘awesome vibrato’ and awesome tone. Dutch famous guitarist Ruben Hoeke also wrote praise about Joris his guitar playing style after a contest some years ago. Joris calls it one of his highlights Ruben Hoeke Band joined them on their first album and on stage during the launch of that album.