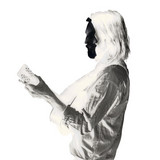 "I'm going to give it 10 full-length records and then I'll be content to disappear," Bean jokes. Set to release his fourth record, Matthew Bean (who goes by the stage moniker Sneaky Bones) is almost halfway there. "Things are growing, slowly, but I don't mind –

someone asked me what my goal was with music and one word popped into my head – longevity." Bean has been gathering a fanbase around the world, having completed three extensive tours of Europe, two inter-island tours across New Zealand, and a scattering of shows across the western US and Canada in between. With every tour, more merch disappears, rooms fill and sell out, and most importantly, the music continues to grow. Time away from home also informed a lot of the songwriting on the upcoming release. "Life has been pretty tumultuous since recording STRANGERS and some of that chaos seeped into my songwriting on this new record," Bean explains, "but, it has this cathartic coherence because the songs were mostly written back-to-back, in a much shorter time frame than previous records." The new record, LITTLE WORDS, will just appear one day.