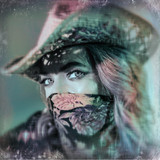 It's never to late to do what you love.... "Music has always been my private world, where I could express myself freely". Raising a family and building her fashion career had to be her focus for so many years, but now it's all those memories, those stories, those characters, that form part of her new songwriting, her passion, and it's time to share it. Paula has always being around music via her family recording studio - ELECTRIC AVENUE STUDIOS in Sydney, with it's amazing recording artists, it's vintage microphones and analog tape recorders, and it's well known owner Phil Punch. It was not until one of it's former sound engineers ROBIN GIST expressed an interest in producing her music that this special music collaboration began and Paula released her first Album “Don’t Look Down” in 2018. After performing in the late 90s on the Sydney Indie music circuit at the Cat & Fiddle, The Hopetoun and 3 Weeds, supporting Ed Kuepper, The Gadflys and Neil Murray and organising women singer songwriter nights called "The Friday Girls", Paula only did the occasional gig. But now she regularly performs around Sydney again, and loves singing at The Gasoline Pony in Marrickville where she

hosts songwriter afternoons called "The Punch Sessions" with other local musicians. In 2018 she toured with Jackie Bristow and Mark Punch in California. Paula is currently working on her first studio album, this time with Phil Punch & Robin Gist at Electric Avenue Studios Sydney due for release in Feb 2020