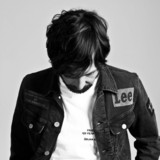 Edu Martínez, best known as the keyboard player for some of the most influential indie bands from Spain. Sidonie, Zahara, La Habitación Roja, Partido or Pumuky among others have relied on his musical talent on the keyboard. Passionate for vintage synthesizers and space-age bachelor cocktail music, finds his path on the tracks opened by Brian Eno and the electronic music pioneers. Born in 1979, he soon discovers the new sonic palette from the music of 80's, which is a seminal influence on his compositions. While Classic Music was a major part of his musical diet when he was young, in his early teens Edu developed a taste

for Pop-Rock Music. Among its musical influences we can find names like Elliott Smith, Ryan Adams, Radiohead, Air, Counting Crows, The Beatles, The Charlatans or Andy Shauf. First works in his professional solo career include the OST for the Linea de Meta documentary film and an official Remix of the song Siglo XX for Sidonie.