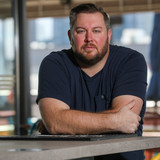 Matt Rogers is making fans around the world without leaving the 615. With a weekly residency at Ole Red, the Blake Shelton/Grand Ole Opry joint venture in the heart of Music City, Rogers has reached a growing global audience enamored by his raw, country-at-heart/blues-in-his-soul style of music. Known for his energetic stage show, Rogers is equally at home in the writers’ room. When he isn’t on the road, Rogers is writing music with some of Nashville’s best tunesmiths. His song, "Coal," has won several songwriting awards from NSAI/CMT, Music City Songstar, American Songwriter, Songwriting University, and Mid-Atlantic Song Contest. He achieved the top award from Music City SongStar for his song, "She Was Everything," as well as a finalist slot in the USA Songwriting Competition. Fans and the music industry are taking notice including country music legend TG Sheppard, who opined that Rogers is “the real deal…the total package. A great singer, a great picker, and a great songwriter.” Rogers has also received recognition from industry tastemakers including Robert K. Oermann, who selected the title track of Matt’s EP, Richest Place On Earth, for Music Row’s DisCovery Award, praising the cut saying, “Extremely well written and sung with fire and conviction. Play this.” And from songwriter/author and radio personality Devon O’Day, who said, “If you don’t know the name Matt Rogers then you need to write it down. He’s going places.”