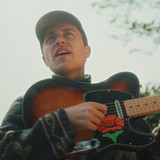 www.weberrecords.com Called “the Andy Kaufman of love songs,” singer-songwriter Austin Weber and his band play unstoppable shows with playfulness verging on recklessness. Based in Los Angeles but with a New York grit, Austin writes songs for fast love and Uber Pools and trying to get your girlfriend to stop with the Juul and other random stuff that’s happening these days. Austin’s inventive melodies provide the free-flowing structure that is supported by the driving, dance-focused rhythms of David Caploe and Adrian Diaz (of Hate Drugs) and Scott Roberts. If Vampire Weekend made a Beach Boys record…played on tour by LCD Soundsystem, that would make Austin Weber and his band.