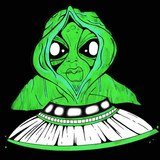 Alien Instant Noodle?! Can you eat that? Or is this the latest marketing prank by the food industry? Anyone who has gotten hungry now will be disappointed at first. Since the end of 2017 Alien Instant Noodle have stood for modern Nu Metal. With influences reaching back to the 90s, the five-member band from Hannover and Hildesheim created their own sound, which can be classified between Limp Bizkit and the early works of Linkin Park. Through well-directed pairing of honest lyrics with hard guitar riffs and groovy lines A.I.N. catapult the listener into their very own interpretation of Nu Metal. Thrilling rhythm passages, which are supported by harmonious guitar sounds and then powerfully broken again only a few moments later, sweep the audience away from the beginning. Sometimes it's just fine impulses that are thought-provoking, sometimes the passages are plaintive and denouncing. But one thing is for sure - when frontman Tobit starts on the mic, it's 110 percent! The message is clear: Have fun, get down and rock the stage with Alien Instant Noodle!