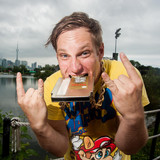 MC Lars (real name: Andrew Nielsen) began making hip-hop-based tapes while still a kid, but was sidetracked from rap by such traditionally important issues (to teenagers) as playing guitar in a punk band and getting accepted to a college. Nielsen went to Stanford and then did an exchange stint at Oxford, but all the while he was fiddling with desktop productions and developing his quirky, pop-culture-savvy style. Boisterous live gigs and word of mouth built buzz for Lars' home-studio raps (influences: everything from Atom & His Package and Weird Al Yankovic to KRS-One and the Beastie Boys). London imprint Truck Records issued a Lars full-length, Radio Pet Fencing, in 2003, and the MC followed that with U.S. and U.K. tour dates. While the entirety of Fencing was recorded on his computer, the 2004 EP Laptop -- while still charmingly simplistic -- was a comparatively grander production, with samples of notable rockers (Piebald, Brand New) and a stronger melodic sense. Cuts like "iGeneration" and "Signing Emo" were hits with downloaders and mtvU viewers, and MC Lars did live dates with groups like Gym Class Heroes and Bowling for Soup through spring 2005. The full-length The Graduate -- as MC Lars could hence call himself a Stanford alum -- appeared in March 2006. In 2009, he collaborated with Weird Al Yankovic on "True Player for Real," a track from This Gigantic Robot Kills, and he was joined by KRS-One and Sage Francis for Lars Attacks! in 2011. One year later, the Edgar Allan Poe EP dropped. Lars' 2015 project, The Zombie Dinosaur LP, was funded by Kickstarter and featured appearances from Kool Keith and Watsky, among others; it reached Billboard's Heatseekers chart. Next came the 2016 mixtape Donald Trump Has Very Bad Morals and a 2017 EP, Revenge of the Nerd. ~ Johnny Loftus, Rovi