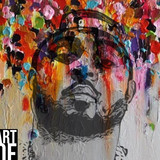 Forsyth, Georgia-based trap artist and innovator Jon Clawd creates music and film inspired by his own life story. He has combined the soul of his gospel-singing mother and the discipline he used to become a high school football star to create a promising career in music and media. Jon Clawd’s music and style have been compared to greats like CeeLo Green, Andre 3000, and Ice-T but he remains a unique and individual artist. He is now part of the Rich Mogul Records family, after a series of well-received independent releases, and his latest track and video, “Clawd Have Mercy,” are both straight fire.   Life has taken Jon Clawd down many roads, but he has now fully arrived as a complex and multifaceted modern artist. His blend of soul, work, and originality has him moving steadily upward and those around him already know that he is heading towards bigger things. Lock in on him now, before the rest of the world beats you to it. Jon Clawd is currently about to release his first project entitled Fried Fish and Moonshine late summer 2018.