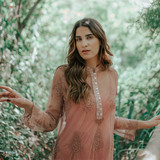 Marilia Charalambide was born in 1997 in Cyprus. She is a well-educated musician, with a BMus degree from the University of Surrey, and a professional singer of Greek éntechno / folk music.   She introduced herself initially participating in talent shows and various concerts and musicals in Cyprus and the UK, while at the same time exploring her love for other arts such as dance and theatre acting.   In 2017 she participated in one of the most prestigious and spectacular fund-raising events in the UK, “Star Ball 2017”, organized by the “Yianis Christodoulou Foundation” in partnership with the “DM Thomas Foundation for Young People”.   Her favorite female singers are Haris Alexiou, Melina Kana, Natassa Bofiliou and Eleni Tsaligopoulou, but she is also inspired by international pop star vocalists, such as Adele and Christina Aguilera.   Marilia’s first single, titled “Kryfi mou agapi – My secret love” was released in 2020 (music/lyrics by Giorgos Karadimos). She has now released her following single, “Horia sou i kardia” (music/lyrics: Stavros Siolas), and also working on her debut lp.