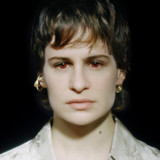 Christine and the Queens

Featuring Christine and the Queens

With her poignant, thought-provoking electronic pop, French singer, songwriter, choreographer, and dancer Christine and the Queens blurs the lines between theater, singing, and dance as skillfully as she plays with the concepts of gender, sexuality, and identity. Influenced by the theatrical pop of David Bowie and Laurie Anderson, as well as the choreography of Michael Jackson, she often combines her atmospheric music with computer-based multimedia presentations. Christine's 2014 debut album, Chaleur Humaine, which explored her turbulent adolescence as a queer woman, announced her as a distinctively vulnerable talent on the strength of the singles "St. Claude" and "Tilted." She delved even deeper on 2018's Chris, an examination of gender stereotypes set to '80s R&B sounds that underscored her commitment to making listeners think, feel, and move.

Born Héloïse Létissier in Nantes in 1988 to a teacher and English professor, Christine grew up in an artistic, literary household and took piano and dance lessons at an early age. Later, Létissier studied theater at École Normale Supérieure de Lyon (ENS Lyon) and moved to Paris in 2010. Following a bad breakup, Létissier created the persona of Christine and embarked on a music career, taking the Christine and the Queens moniker as an homage to the drag queens who danced with her while she performed. She released her debut EP, Miséricorde, in 2011, and followed it with 2012's Mac Abbey. That year, Christine and the Queens' dynamic stage shows won the Best Discovered Act award at Le Printemps de Bourges festival and the Premières Francos award at another festival, Les Francofolies de La Rochelle. With 2013's Nuit 17 à 52 EP, Létissier made her debut on the French albums chart SNEP. In 2014, Létissier delivered Christine and the Queens' debut full-length album, Chaleur Humaine, a set of songs inspired by her teenage years that featured the single "Saint Claude." Early in 2015, Létissier won the Victoires de la Musique for 2014's Best Female Artist; later that year, Chaleur Humaine was reissued on Atlantic in the United States as Christine and the Queens, and featured the English-language single "Tilted." The album was also reissued as a deluxe edition in the U.K. in 2016, a year that saw Christine and the Queens cover Beyoncé's "Sorry" and the BBC choose Létissier as one of its 100 Women of the Year. Létissier wrote, arranged, and produced the project's second album, Chris, a set of songs that incorporated tougher, '80s funk and R&B influences and lyrics that questioned traditional gender roles. Featuring the Dâm-Funk collaboration "Girlfriend," the album arrived in French and English versions in September 2018. Chris reached number three on the U.K. Albums chart and earned a silver sales certification. Létissier spent a year and a half touring in support of the album; during that time, she also collaborated with Charli XCX on the 2019 single "Gone" and earned accolades including a GLAAD Media Awards nomination and a Brit Awards nomination. In February 2020, Christine and the Queens returned with La Vita Nuova, an EP whose title track featured a collaboration with Caroline Polachek. The release was accompanied by a short film with choreography by award-winning choreographer Ryan Heffington, whose work includes the video for Sia's smash hit "Chandelier." ~ Heather Phares & Matt Collar