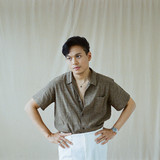 Releasing his debut album The Journey was a feather in the cap for Rendy Pandugo, for it’s been a long way for him to realise. It was back in 2014 when this singer / songwriter found a learning curve. Rendy Pandugo, who was born in Medan, May 7, 1985, decided to improve his singing skill by finding regular gigs and singing from café-to-café whilst surviving life in Jakarta. His hard work finally paid off when he finally signed a record deal.

His debut album The Journey was released on August 11, 2017 with 11 tracks produced at Kennel Studio in Stockholm, Sweden – including some of his hits such as I Don't Care, Silver Rain , By My Side and 7 Days. On February 14, 2018 Rendy released Heaven, collaborating with Isyana Sarasvati and Afgan, and released an EP with them including the hit songs Feel So Right & Lagu Cinta. Rendy then released 2 more EPs, the first one titled “CHAPTER ONE”, including the hit singles Why? (feat. Matter Mos) and also Edge of The Heart. The second part of the EP, "CHAPTER TWO" included tracks such as Love Coaster, Breathe Again (feat. Enrico Octaviano) and Paper Heart. Rendy Pandugo released HOME which also marked his new “home” and