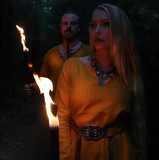 Vǫluspá (The Prophecy of the Seeress) is a name known from the Poetic Edda which tells the story of the creation of the world and its foretold end. Drawing on inspiration from mythology and folklore, Vǫluspá is a folk-rock band founded by Sól Geirsdóttir AKA «TheVikingQueen» in 2012. The band started out as a studio project and vent on stage for the first time in 2019. With varied musical inspiration they create a fusion of traditional folk music and modern musical elements as they strive to create a soundscape worthy of their name.