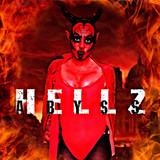 The Devil from downunder It's no secret that the world is currently stuck in some sort of crazy bad dream.. Bad moods, confusion and frustration is everywhere. Some choose to lay down and give in., Hellz Abyss thrives on the twisted, sick game of life. Choosing to accept the challenge by damning the negative taboo to Hell, going bat shit crazy and releasing some great new hard rock! Soaring near 6 octave vocals and screaming lead solo's! Hellz Abyss is set to tour the UK-EUROPE and the USA in 2022. HellzAbyss has also recently celebrated signing with Established Global Artist Management Distilled Entertainment , USA.Distilled artists have performed alongside Soulfly , Metallica , Slayer , KORN