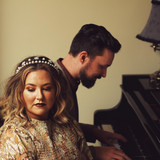 The Asking are an indie folk-pop vocal duo made up of the husband and wife team Greg and Kate House. The pair met while leading worship together at Hiawatha Youth Camp in Michigan’s upper peninsula and have been leading worship together ever since. Their passion for using music to point others to Christ led them to start writing music together as The Asking in 2014. They released their debut EP in 2015. After a successfully funded Kickstarter in March 2017 they released their first full-length album in June 2017 to critical acclaim. With their latest release, Call the Ships Home, the duo explore themes of the meaning of home, stepping out in faith, and finding hope at the end of it all. “A lot of our songs come from what we see happening in our church family. Struggles and stories from the students we work with in student ministries as well as how we see them stepping out in faith in ways that are new for them,” Greg shares. This is evident throughout the album but perhaps most clearly on the tracks “Walk on Water,” “End of Your Unwind,” and the title track “Call the Ships Home.” “Walk on Water” uses the story of Peter walking on water to explore the journey of stepping out in faith as a lifestyle. While “End of Your Unwind” examines the ways that worldly things will always fail to live up to expectations. “Call the Ships Home” echoes the answer of the real hope that God “will make all things new.”