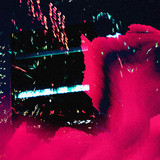 Magnus Larsson based in Sweden has written music under the name Lost Years since 2006. Although in 2010 the road took him towards a more 80’s inspired music style. Signed to Rosso Corsa Records in 2012 – released the debut EP Nuclear and short thereafter the album Black Waves. The sound of Lost Years is highly inspired from his childhoods continuous listening to artists like The Pet Shop Boys and the Italo genre. With the use of mainly analog synths and drum machines the formula is complete. Lost Years and his colleague Mitch Murder wrote the soundtrack to the very successful short movie Kung Fury released in 2015. The soundtrack was released on Universal Records. Amazon Prime featured some of Lost Years music in their television series Red Oaks.