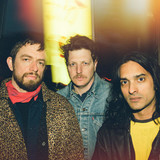 “We were jokingly calling this our classic rock record at one point, referencing The Turtles or the Stones or Fleetwood Mac,” laughs Yeasayer’s Chris Keating while describing his band’s fifth LP, Erotic Reruns. But really, this is Yeasayer distilling all their strengths, while paring them to their essence. Intros are shortened, hooks are immediate, and its songs are concise, all the fat trimmed. This is an eminently danceable record that also encourages its audience to think, an attribute the band aren’t given enough credit for which they desperately deserve. Their societal and political commentary is erudite and trenchant. Erotic Reruns is light years removed from the band’s 2007 opening volley, All Hour Cymbals, as they found their footing on their own terms, impervious to outside “scenes,” and the then ubiquitous DIY culture so prevalent in Brooklyn, with classic ‘00s singles “2080” and “Sunrise” foreshadowing the greatness the band would fully realize on Cymbals. Their artistic progression continued on 2010’s Odd Blood, with the fantastic trio of singles “O.N.E.,” “Ambling Alp,” and “Madder Red.” 2012’s Fragrant World, an album with a Kurtzweil-esque infatuation with technology, retained the band’s boogie down groove and innate pop instincts, with lattices of ’80s pop, ’60s baroque, and the halcyon days of cut-and-paste sampling added into their byzantine equation.